It is no news that Corona Virus aka COVID19 which started in China in 2019 has become a whole Pandemic and as such has halted economic activities around the Globe because there is still no known cure for the ailment. 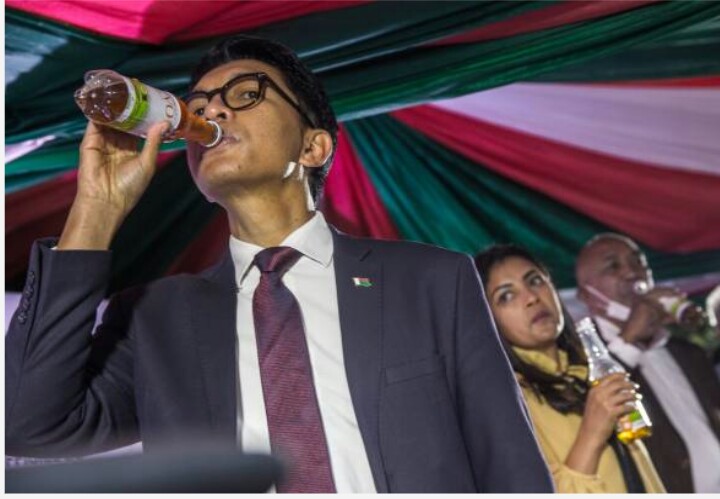 However, recently, the President of Madagascar, Andre Rajoelina, announced a herbal cure which they claim they have been using to treat their citizens who have contracted the virus and it has proven to be most effective. Here are a few things you need to know about the herbal remedy.

However, the World Health Organization is yet to endorse and recognize this herbal tea as a remedy for COVID19 and warns that caution should be taken when using “clinically untested drugs” as it could be tantamount to self-medication.

Unfortunately, in the second week of May, news had it that Madagscar recorded its first death caused by Corona Virus. The man who is said to have died after contracting the virus was a 57 years old man. Details are still sketchy about the late man’s health history.

Republic of Madagascar is a Country in Africa, located off the Coast of East Africa. It is known as the second largest Island Country in the world. It is also said to be one of the poorest countries in Africa

Remember that you too can become a BLOGGER on this site. Just register, create post and start Blogging. Registration is  FREE!

0 #3 Peter 2020-05-23 07:53
person: It is true that effective medicine is being sought worldwide, but it is not true that it has so far been successful. I would not rely on the "miracle cures" that appear again and again and therefore follow the 3 basic elements of avoiding infection: wear a mask, keep your distance and wash your hands.
Quote
+1 #2 person 2020-05-22 19:40
I hear Italians too has now found a cure. is that true?
Quote
0 #1 Peter 2020-05-22 07:56
Well, there is still no proof that Artemesia could actually help against Covid-19. What is striking is that Covid-19 appears to be spreading more slowly on the African continent than in the "western world."However, since the active ingredient of Artemesia is widely used in African countries to treat malaria, there could indeed be a connection with a slower spread. But also other factors such as lower test rates, lower average age of the population, etc. certainly play a role. Until an actual effectiveness is proven, you should not rely on it and follow the recommended measures such as masks hygiene and distance.
Quote
Refresh comments list
RSS feed for comments to this post